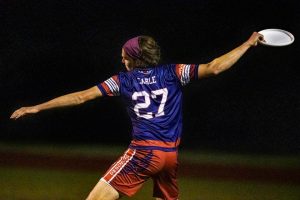 Legends, a sports advisory and experiences company co-founded in 2008 by the New York Yankees and Dallas Cowboys, has acquired a minority stake in the American Ultimate Disc League (AUDL). The AUDL, which was founded in 2012, has 25 teams in the United States and Canada.

This is the second time Legends has made an equity investment in a sports league. In August 2021, Legends bought an ownership interest in the Professional Fighters League, a mixed martial arts organization.

Legends plans on completing more equity deals in the months and years ahead, primarily in small, recently launched leagues. The AUDL transaction is part of a strategy Legends has implemented since the company earlier this year acquired Maestroe Sports & Entertainment, a consulting and services company focused on so-called “high growth” leagues that are in their early states or have the potential to grow.

As part of that Maestroe deal, Legends launched its Legends Growth Enterprises division, through which the company invests in leagues and helps them with their sponsorships, media rights deals, merchandising and other areas.

Maestroe had been advising the AUDL since 2019, but this expands the relationship through the equity stake and providing more services such as merchandise, data analytics and possibly expanding to other countries.

Roe would not disclose financial details of the AUDL investment. But a group led by Rob Lloyd, the former president at Cisco Systems CSCO -1.8% Inc., will hold a majority ownership stake in the AUDL. That group had bought a 90% stake in the league in December 2012.

Meanwhile, Steve Hall will remain the AUDL’s chief executive and commissioner. Hall, who started playing Ultimate in 1985 as a sophomore at Georgia Tech, worked for 13 years for Goldman Sachs and Citigroup C -0.1% and launched his own private-equity firm in 2011. He got involved in the AUDL in 2016 when he became co-owner of the league’s team in Atlanta. Two years later, he was named CEO and commissioner.

“I tell people this was the great opportunity of a lifetime where my hobby, my passion for playing Ultimate, comes together with my business acumen in terms of building companies and being in the private equity world,” Hall said. “I still have some private investments that I have on the side, but I’m pretty passive with those now. This is absolutely my full-time. I’m back to 12 to 14 hour days. I feel like I’m back to Goldman Sachs all over again, but like they say, it’s not a job if you enjoy what you’re doing, and I definitely am enjoying it. I’m fully active and fully engaged seven days per week.”

Since its founding 10 years ago, the AUDL has grown from 10 to 25 teams. The regular season runs from late April through late July, with each team playing 12 games. The games are usually on Saturday nights, but some are on Friday nights and Sunday afternoons. The top 11 teams advance to the playoffs, culminating with a championship weekend on Aug. 26 and 27 at Breese Stevens Field in Madison, Wisc.

Players in the league receive a small stipend and have their uniforms and travel costs covered, separating it from other Ultimate leagues where players pay to compete. The teams also each have a physician, trainer and health and services manager that can help them train and recover from injuries. About 90% of the AUDL players are former college players who now have full-time jobs while the others are current college students.

Each team is independently owned and generates revenue through ticket sales, merchandise, concessions, local sponsorships and youth camps and clinics.

The AUDL’s league office, meanwhile, earns money primarily through national sponsorships and media and data deals. The league has a contract with Fox Sports, with the network’s Fox Sports 2 cable channel airing AUDL games on Saturday nights and showing replays on Wednesday nights. It also has its own streaming service, AUDL.tv, where fans can pay $9.99 per month to watch all the games.

In April, the AUDL signed a five-year deal LSports Data, an Israeli firm that will have access to AUDL’s player and game data and create gambling products for companies such as DraftKings and FanDuel.

Hall is looking to expand the AUDL’s betting deals and get into video games, non-fungible tokens, customized discs, shirts and gear and other areas. The AUDL plans on working with Legends’ technology group that specializes in collecting and analyzing customer data.

“We can make a lot smarter decisions in how we market and advertise to those people,” Hall said. “Now we have a lot more data behind us when we go and talk to a sponsor, discuss the breakdown and why the sponsor might really like the clientele of the AUDL.”

Last year, Sixth Street, an investment firm, acquired a majority stake in Legends that valued the company at $1.3 billion. Legends works with clients in professional and college sports and entertainment, helping them with business plans, sponsorships, arena naming rights, hospitality and numerous other areas.

“What we see Legends being able to do is they provide a level of service that we wouldn’t be able to touch for years and years,” Hall said. “We’re too small for the Legends’ typical clientele. The fact that they are excited to look at the emerging sports they think could be the next big thing and they want to partner with us is terrific. We think they’re going to really help raise our profile and provide high-quality talent at scale, which we wouldn’t have been able to get otherwise.”